So I didn't end up writing a blog post announcing CALENDAR_DOT_EXE, a 1,999,998 year calendar for the Nintendo Entertainment System. I suppose I could do that now, especially considering I recently added support for the Jewish calendar system and because the Jewish new year (Rosh Hashanah) happened earlier this week, I may as well write a post about it. A picture of CALENDAR_DOT_EXE with the Jewish calendar on the current month as of writing this post can be seen below. 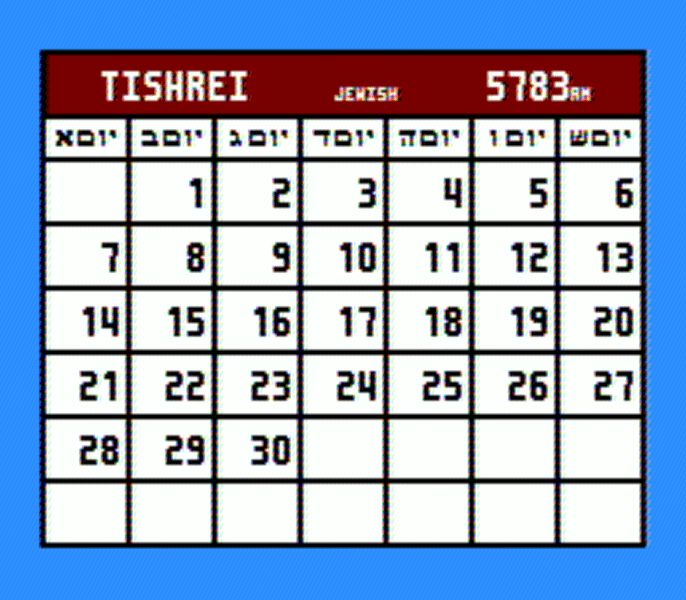 
On April 4th, 2021, I added support for 3 calendar systems Matt Parker ("Stand-up Maths" on Youtube) discussed in a the video "Leap Years: we can do better". The link to that video is below. The calendar systems discussed in that video, which I named "Parker A", "Parker B", and "Parker C" were selectable from the main screen of CALENDAR_DOT_EXE by inputting the Konami Code (Up, Up, Down, Down, Left, Right, Left, Right, B, A) in the date select screen.

There were not many updates, especially major updates, until late August of this year, when I decided to add the Jewish Calendar. The Jewish calendar system was a lot more difficult of an addition than I expected initially.


Calendar Systems and Their Rules


I will be explaining the rules for the Julian, Gregorian, Roman and Jewish calendars below. All of these calendars have one major thing in common, which is that there is no year 0. The last day of year -1 is followed by the first day of year 1 in all of those calendar systems. I will be describing the rules for positive years, but negative years can be figured out if you add 1 to the year, so -1 becomes 0, -5000 becomes -4999, etc...


I should also mention that I will interchangeably use the terms BC (Before Christ) and BCE (Before Common Era) along with AD (Anno Domini) and CE (Common Era). In Christian contexts, I will use BC and AD, and in non-Christian contexts, I will use BCE and CE. This will mostly apply in using BC and AD in the Gregorian calendar and the period of time after the Council of Nicea in the Julian calendar and BCE and CE in other situations relating to those calendars.


In 46 BCE, Julius Caesar proposed a change to the calendar. Before then, a high priest (Caesar's job) decided whether to add a short month to the year when the calendar drifted away enough from the seasons every few years. That short month would fequently be added or withheld for political reasons, as Senate terms started at the start of the year, which means the high priest could make terms longer or shorter. There was also another issue, as Caesar had been away from Rome to conquest for about a decade, which were the events that lead to the 4 Triumphs.


In Caesar's calendar system, a year would be 365 days for three years followed by a fourth year that would be 366 days. An automated system was created that did not need him to be in Rome to keep the calendar aligned to the Sun. That hip new calendar seems to have caught on, enough for Julius to get a month named after him, even if it caused year 45 BCE to be 445 days long and called "the year of confusion".


Eventually, Pope Gregory around year 1582 AD had noticed or was informed that the calendar was drifting from the Sun since the Council of Nicea, which established the rules for determining Easter as the first Sunday after the first full moon on or after March 21st. March 21st was set as the vernal equinox, but because the Julian Calendar was drifting over time, March 21st was drifting farther and farther away from the actual vernal equinox. To fix that, a new calendar system was created in 1582 AD based on the Julian calendar to realign March 21st to the vernal equinox. Unfortunately, while that calendar system is what most countries use now, at least for business relations with other countries, the calendar wasn't hip cool enough for one of our months to be named Greg...

Worded another way, a year is only a leap year if it is divisible by 4, unless the year ends in 00, then it must also be divisible by 400 to be a leap year. This brings the average year length to 365.2425 days.


There was also another complication, because after Julius Caesar's death, the high priests misinterpreted the rules of the Julian Calendar and set leap years every 3 years instead of every 4 years for a few decades. Agustus Caesar eventually stopped leap years for a period of time to resync the calendar. This action was cool and rad enough for Augustus to get a month named after him.


The leap year error was described by Macrobius Ambrosius Theodosius ambigously. I'll post what Wikipedia says he said and link to the Wikipedia page.


Caesar's regulation of the civil year to accord with his revised measurement was proclaimed publicly by edict, and the arrangement might have continued to stand had not the correction itself of the calendar led the priests to introduce a new error of their own; for they proceeded to insert the intercalary day, which represented the four quarter-days, at the beginning of each fourth year instead of at its end, although the intercalation ought to have been made at the end of each fourth year and before the beginning of the fifth. This error continued for thirty-six years by which time twelve intercalary days had been inserted instead of the number actually due, namely nine. But when this error was at length recognised, it too was corrected, by an order of Augustus, that twelve years should be allowed to pass without an intercalary day, since the sequence of twelve such years would account for the three days which, in the course of thirty-six years, had been introduced by the premature actions of the priests.

CALENDAR_DOT_EXE uses Joseph Justus Scaliger's interpretation of Macrobius's description, which is that 42 BCE was the first leap year along with every 3 years after 42 BCE until 8 BCE (the last leap year would have been 9 BCE) when Augustus Caesar stopped leap years from occurring until after 4 CE.


And now onto the calendar system that I added most recently with I would say are the most complicated rules. This calendar system is a lunisolar calendar, so the months are based on an entire moon cycle, but the year is shifted using a leap month from time to time to realign the calendar with the seasons.


There is some context also that is needed to make things make a little more sense. Please don't get too angry with me if I get some details a little bit wrong, as I am neither Jewish nor a scholar in Judaism.


The calendar starts at year 2 AM (Anno Mundi, or "year of the world") on a Friday, which is set as the day Adam was created. Year starts are determined by the molad (moon "birth") of the month Tishrei, which is the month that the calendar year goes up by 1, although a different month, "Nissan", is considered the first month of the year for other reasons. Molad Tishrei of year 2 AM is set at Friday 14 hours and 0 chalkim. The other days of creation were the last 5 days of year 1 AM. Technically there would have not been any days before Elul (the month before Tishrei) 25 of year 1 AM, but the molad of Tishrei on year 1 AM would have been Monday 5 hours and 204 chalakim.


I should probably explain a few terms quick. A chalakim is 1/1080 of an hour. A molad is the moment of the new moon or the moon's "birth".


Dates and years before Elul 25 of year 1 AM are completely speculative.


These rules are complicated enough that I'll split it into more than 1 section.

We now have molad Tishrei for the year we want to know the calendar for. Now we need to figure out if we need to postpone the beginning of the year at all. There are slightly different rules depending on if the year is after year 3 AM or not. Let's start with the rules for years after 3 AM.


Notice in the previous section I mentioned Tishrei 1 of year 2 AM was a Friday. That breaks rule 1, but fear not! That is fixed with exceptions. It could be argued that there was no need for Hoshana Rabba to not land on Shabbat or Yom Kippur to not land on a Friday or Sunday because they are days dealing with forgiveness from sin, especially for the previous year, so rule 1 (and rules 3 and 4 as a result) would no longer apply. This causes an issue for year 3 AM, as if rule 2 were followed fully for year 3 AM, year 2 AM would be 356 days long, which is not a valid amount of days, so rule 2 does not fully apply for year 3 AM.


With that said, years 3 AM and before use only the following rule


If you somehow interested in CALENDAR_DOT_EXE after dealing with that barely organized infodump, you can find it on my GitHub in the following link. The ROM file can be found at bin/calendar-dot-exe.nes in the repository.


I am working on making the ROM a polyglot file that is also a functioning HTML file that can also provide the calendars for years -999,999 to 999,999 of the same calendar systems. The problem I'm having is the amount of space the HTML/CSS/JS side of things is taking, even after manually uglifying the Javascript and CSS to take up less space. I could just make the ROM file a 40KB ROM and give myself 16KB more of space, but what's the fun in that? Code golf is where it's at! I may still be stuck increasing the ROM file size though, but not without a fight!!!