Implementing Conway's Game of Life on the NES 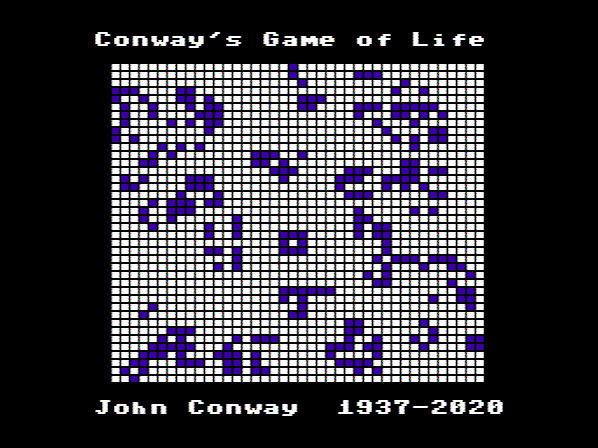 To the sadness of myself and many other professionals and hobbyists in STEM fields, Mathematician John Horton Conway passed away on April 11th, 2020. One of the concepts he was most known for creating was Conway's Game of Life.

IMPORTANT: If you just want to skip to the details about puting Conway's Game of Life on the NES, you can CLICK HERE to jump to the NES Game of Life details. If you want to play around with the NES ROM file or check out the source code (GitHub) of the game, you can find download and source code link buttons at the bottom of this blog post.

What is Conway's Game of Life?

Before I Explain What Conway's Game of Life Is...

Rules of Conway's Game of Life

If you are reading this blog post, I would assume you are likely familiar with Conway's Game of Life. With that said, I will explain the rules anyways.

First, you will need a grid. It can be any size you want. Here is a 10x10 grid as an example to show what I mean.

To determine what the next turn of Conway's Game of Life will be, you will need to check every cell on the grid and figure out how many neighbors it has that are currently alive.

To determine if a cell that is currently alive will be alive in the next turn, figure out if it has EXACTLY 2 or 3 living neighbors.

If a cell is currently alive and has EXACTLY 2 living neighbors, it will stay alive

If a cell is currently alive and has EXACTLY 3 living neighbors, it will stay alive

FEWER THAN 2 living neighbors will result in the cell being dead next turn due to isolation.

If a cell is currently alive and has FEWER THAN 2 living neighbors, it will die of isolation

MORE THAN 3 living neighbors will result in the cell being dead next turn due to overcrowding.

If a cell is currently alive and has MORE THAN 3 living neighbors, it will die of overcrowding

A cell that is currently dead will become alive next turn if there are EXACTLY 3 living neighbors. Think of this as the cell being "born."

If a cell is currently dead and has EXACTLY 3 living neighbors, it will become alive (born)

FEWER THAN 3 living neighbors will result in a dead cell remaining dead next turn.

If a cell is currently dead and has FEWER THAN 3 living neighbors, it will stay dead

MORE THAN 3 living neighbors will result in a dead cell remaining dead next turn.

If a cell is currently dead and has MORE THAN 3 living neighbors, it will stay dead

Conway's Game of Life Rules in a Nutshell

Conway's Game of Life on the NES

So this video shows my implementation of Conway's Game of Life running on an NES emulator.

So you noticed... Yeah, this is running at 100% speed of an NTSC (North American or Japanese) NES/Famicom. This is the fastest it will go on hardware. There is actually a reason for that...

Earlier in this post, I mentioned that you have to figure out how many living neighbors a cell has FOR EACH CELL. In this case, there are 40x40 cells, or 1600 cells altogether. The bigger the grid, the more cells you have to analyze before you know the next turn.

There are certainly ways I can shave off a few CPU clock ticks per cell analysis. I'm not currently sure if I'm planning on making this ROM more efficient in the future. We'll see though.

(Warning: Math ahead. Only a little bit though. Arithmetic and exponents are discussed below, so fair warning.)

So an annoying couple of quirks about the NES... The way the graphics chip (PPU, or Picture Processing Unit) is set up, you can't just draw single pixels onto the screen wherever I want. You actually need to define a set of 8x8 pixel "background tiles." There is a hard limit to how many background tiles you can use as well... 64. Okay, so I have 64 8x8 pixel tiles to work with. Why did I decide to stick with a 40x40 grid? Why didn't I decide to go with more grid cells?

The NES only has 2048 bytes (16384 bits) of memory available by default to games (we're going to ignore cartridge RAM, like what was used in The Legend of Zelda to store save data). 256 bytes of that are used for sprite positions and attributes and another 256 bytes are used for what is called "the stack", so I now have 512 bytes fewer to work with, lowering what I can use to 1536 bytes of memory. The current turn of the grid and the next turn of the grid need to be stored somewhere in that 1536 bytes...

As I stated earlier, a cell can be either dead or alive. 1 or 0. Binary. That means I only need a single bit to say whether a particular cell is dead or alive. Great! With 1600 grid cells, I need 1600 bits to store the current turn. 1600 bits / 8 bits per byte = 200 bytes, so I need 200 bytes to store the current turn and 200 more bytes to store the next turn. Thankfully, that leaves me with 1136 bytes left, so RAM is not an extra bottle neck like CPU speed turned out to be.

This project has lead to me hitting some walls in NES development that I really haven't had to deal with before, specifically CPU speed. The NES really is a slow computer compared to anything even remotely modern. I welcome and encourage other NES homebrew developers to develop their own implementation of Conway's Game of Life on the NES or other retro graming systems. Make a more efficient implementation! Make an implementation that has a grid size of larger than 40x40! Be sure to let me know when you have an implementation of Conway's Game of Life publicly available or other work John Conway has produced. Let us celebrate the life of a brilliant human being.

You will be missed, Professor John Horton Conway. Rest in peace, and may your work continue to spark the creativity of passionate Mathematicians, whether amature, professional, hobbyists who only occasionally dabble in mathematics, or anything in between or beyond.

(My apologies for stealing the phrase Extra Bits from Computerphile. As the sister channel of Numberphile, I feel the phrase was specifically appropriate for this blog post.)

It was actually a few days ago, as I started writing this blog post, when I first learned that John Conway was the inventor of the "Doomsday" algorithm my calendar calculating library datecalc used to calculate the day of the week of positive years (on or after 1 AD) in the Gregorian Calendar.

If you have not seen John Conway talk about things he has worked on or found interest in, embedded below is a Youtube Playlist by Numberphile.

Interested in playing around with this implementation of Conway's Game of Life?

This NES ROM will work on an actual NES or Famicom console if you burn this game properly to an NROM-256 board, the same exact board type Super Mario Bros used (the isolated copy of Super Mario Bros, not the one with Track & Field and/or Duck Hunt included). It should also run on essentially any NES emulator Super Mario Bros can run on.

Check Out the Source Code (GitHub)