What is the KRACK Attack?

A new attack on WPA and WPA2 was disclosed today called KRACK. KRACK stands for Key Reinstallation Attack and can allow an attacker to Man-in-the-Middle (MitM) the connection between a client and a router and replay, decrypt, and in some cases forge encrypted data packets.

When a client connects to a router, a process called a "4-Way Handshake" occurs, as shown in the image below. (STA is the client and AP is the router) 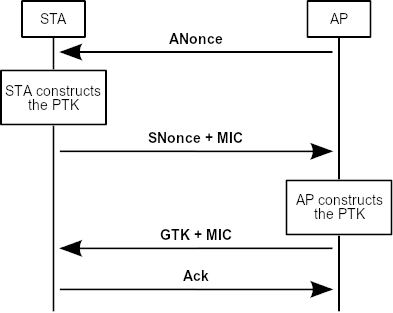 Where is the Flaw?

What Can Happen With Nonce Reuse?

For all 3 of the following encryption protocols, TKIP, CCMP, and GCMP, data packet decryption and replay attacks are a problem when nonce values are reused.

TKIP encrypted network connections (the default in WPA) have been known to not be very secure for a while now. Because of the weaknesses in TKIP, this attack allows an attacker to forge data packets from the client to the router.

CCMP encrypted network connections (the default in WPA2) are protected from packet forgery, but as mentioned, still suffer from data packet decryption and replay attacks.

GCMP encrypted network connections are especially vulnerable to this attack, as the connection from the client to the router and from the router to the client are authenticated with the same key. This means an attacker not only can decrypt and replay data packets, but also forge data to the router AND the client.

The good news is that this problem can be fixed with a patch, which many operating systems have already administered. The bad news is that there is a high likelihood that many Android devices, WiFi routers, and Internet of Things devices will be difficult for users to patch if not impossible. Much of the websites many people use are over HTTPS though, which helps provide protection to users above and beyond the encryption their WiFi may provide, which will also help mitigate damage from this attack.

I highly recommend people use AES (CCMP) encryption and WPA2 on their WiFi routers to also help mitigate damage. Patch your systems when you are able to. Some systems have already issued patches and some may issue patches in the future.

More details about the KRACK bug and other ways it can be used to get around defenses that were in place in previous systems can be found at https://krackattacks.com and the research paper describing it in more detail can be found here.

A catastrophic bug involving some versions of wpa_supplicant on Android and Linux was discussed in the KRACK disclosure website and research paper as well, but that is a topic for another blog post, as the actual attack is different from nonce value reuse and has different security implications.