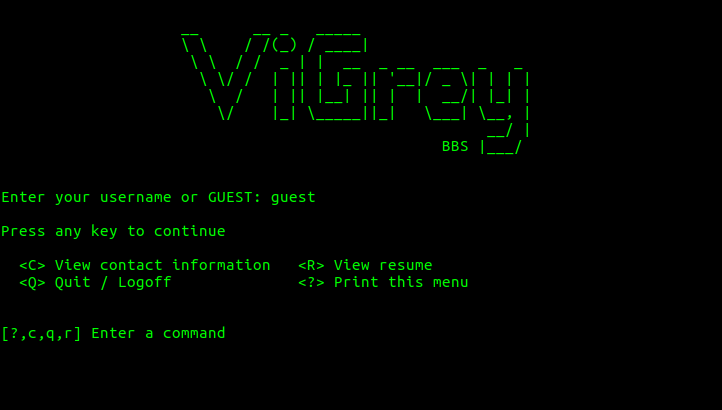 Over the past few days, I have been working tirelessly to build a BBS style telnet server. This comes right after spending a few hours learning how Bell103 300 baud FSK modulation worked and spending the next day learning how to do audio engineering to make a 300bps dial-up internet connection audio synthesizer. I'll be talking a little bit about that project and the motivation for it soon.


Since January or 2014, I have been playing a game using telnet called Telehack, which is a simulation of the 1980s ARPANET. A few days later, I decided to learn how the telnet worked, so I started building a telnet server proxy and started reverse engineering the internet packets that were passing through. It wasn't until that Summer when I decided to build my own telnet server that I could play around with. If someone could make Telehack, I could make a telnet server too. Other projects eventually got in the way and the project was scrapped.


Fast forward a few months later and I finally decided to sit down and watch BBS: The Documentary to see the human aspect of connecting to and interacting with machines before the World Wide Web was a thing. The want to build a BBS style system grew and so did my knowledge.


A few plans have caused me to build this telnet server now rather than waiting, and without giving too much of my future plans away, I plan to utilize this telnet server for quite a few interesting things. At the moment, my resume and contact information can be viewed on it. I hope my future plans and improvements for this server will strike intrigue and excitement into a handful of interesting individuals.